In Scott Welle’s book Wellness he says “When you are challenged you are forced to grow or you can’t meet the challenge.” That quote perfectly describes not only my race at the Winter Triathlon National Championship, but our present COVID-19 situation.

The March 1 race at Theodore Wirth Park in Minneapolis was a 6K Nordic ski, 18 K fat tire bike and a 5K run.

On the line were medals and spots on Team USA for the World Championship.

The small field of 60 athletes was fast and talented. I spent the last two seasons perfecting my skate skiing technique to be ready. I knew going in I was totally out of my element and undertrained for the bike since we had little snow in Milwaukee for fat tire biking.

As I stood at the back of the field waiting for the race to start, a women standing next to me told me she was worried about being slow.  I told her “You do you. Don’t worry about where you finish.”  These were words I would have to remember during the race. I had my own doubts and fears.

As soon as the race started everyone seemed to be miles ahead of me. While my technique has greatly improved, my speed has not. Athletes on the bike leg were passing me while I was still skiing. The hills were steep and they just kept coming one after the other.

I was not strong enough yet to ski up those hills, so I had to herringbone up many of them. I continued to be passed by bikes. So I was not feeling great coming out of transition for the bike.

The bike portion was two loops. I had to walk up several of the bigger hills. I wanted to quit. I started mental negotiations. I reminded myself there were probably only three women in my age group. If I finished I would be on the podium with a spot on the US Team. I told myself to ignore the fact everyone was so much faster than me.

Then, I had convinced myself to drop out. I have an impairment called Charcot-Marie Tooth, a condition much like MS. It makes me tire easily and I was tired. No one would blame me, but I expected better out of myself. Being on patrol has always challenged me to do my best.

I’ve only dropped out of two races in my many years of racing. One was last year when I dislocated an elbow in a mountain bike race. The other I have no excuse. I remember the feeling from dropping out was far worse than any temporary fatigue and pain from being in the race. 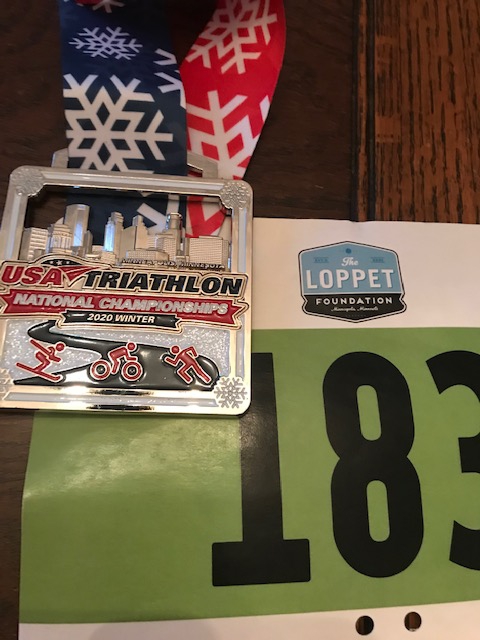 As I finished the first lap I had to make a decision: drop out, or go around another lap and then do 5K of running on hills in the snow. What I decided to do was to take my own advice from the start of the race. I stopped thinking about how tired I was and how much I wanted to quit. I had a shift in my thinking. I decided to pretend I was on a training ride. The weather was sunny and in the low 40’s, a beautiful day for a ride. Instead of focusing on what was going wrong, I concentrated on the beauty of the day and how great it felt to be out on the trail. I noticed the beautiful forest all around me. I thanked the National Ski Patrol members stationed at the side of the course to make sure we had a safe race. I just did me and I had a blast on the second lap.

It just took a shift in my thinking and noticing the positive. Before I knew it I was out on the run and then finishing the course. I took 2nd place and a spot on Team USA for the World Championship. I was a lot slower than I wanted, but just finishing was a victory. It took me over three hours.

I have learned from being on patrol you can’t always anticipate what will happen during a shift. Taking care of injured skiers is not always the way it looks in the text book. You have to deal with the situation presented. The same is true of a race or life. Now we all have a choice as we face the ways our lives have changed over the last few months. None of us expected or prepared for it. But we can all choose how we will respond.

That race ended up being my first and last for the season, before the disruptions and cancellations due to COVID-19. While others have lost far worse, I struggle with the changes in my life too. I’m getting through it just like I did the race. I’m focusing on the positive. I look for something each day to be grateful for. Because winning at life is a lot more important than finishing a race.