Skywalk and Service to Others

Skywalk and Service to Others 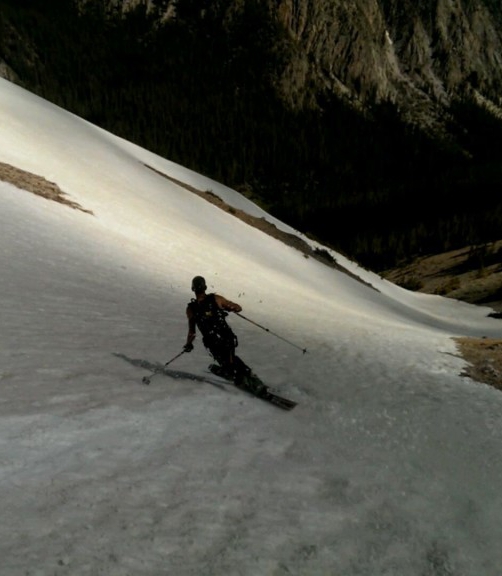 Walking the 22-mile Skywalk across the Sandias with Chuck Hosking is a bit like showering with a loofah, or eating a dandelion salad: a bit raw, a bit rough, but seriously good for you.

On the verge of turning 72, Chuck Hosking’s body and mind retain the virile appearance and functioning of a younger man.

This is due not to Pilates or gym workouts or supplements, but to Chuck’s guiding principles, which he has abided by for decades: eschewing screens and motors.

If Chuck Hosking wants to volunteer at a South Valley farm for a full day of weeding and planting as he does several days a week, he doesn’t drive, but pedals a single-speed bicycle.

One of the first things Chuck did following the death of his wife, Mary Anne, more than 20 years ago, was to sell their car. He has relied on a bicycle ever since, no matter the weather, using it to travel for his weekly hikes in the Sandias, as well as for longer journeys, such as to Grants to visit a 90-year old friend who no longer travels at all.

Chuck rarely has reason to enter a business or store of any sort, and when he does, it is only briefly and for an item related to his bicycle, such as inner tubes, patches or tires. Really, the only establishment Chuck enters on a regular basis is the Mennonite Church on Girard.

Nearly all of Chuck’s needs, including all of his food and clothing, are provided by routine trips to area dumpsters, which have provided not only for him, but for area neighbors who live with him in the historically black and brown neighborhood of Cesar Chavez and Broadway in Albuquerque.

Countless Albuquerque motorists have observed Chuck pedaling with boxes of reclaimed food, often stacked so high on the handlebars that he has to peek around the edges to observe the road, all while steering with one hand, in all kinds of weather.

This is an elective lifestyle. Hosking’s job as a note taker for CNM students with disabilities, as well as his social security disbursements, which he waited until 70 to begin withdrawing, provide sufficient income that Chuck could go to the store as needed, and even purchase and replace a car every few years.

But Chuck’s approach to life, which many would consider extreme, even for a “path less traveled” Burqueño, is driven by principles and values that are at odds with prevailing societal norms. For Chuck, this doesn’t begin and end with living off the trimmings of an affluent society via dumpster diving. Despite his modest earnings, Chuck elects to donate the vast majority of his income (roughly 90 percent) to charities established to address the inequities of global wealth distribution, which he sees as inextricably linked with the unfolding crisis of climate change. Thus Chuck chooses to live, and has done so for many years, happily and with conviction, on just a few thousand dollars a year, while giving the rest away to the less fortunate around the world. 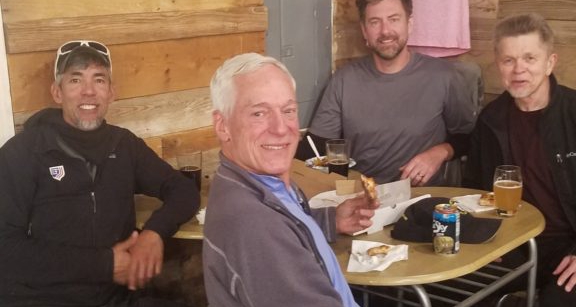 This is because Chuck is relentlessly focused on existential threats to life on earth, including the threat of over-development, over-industrialization, over-consumption, and over-exploitation. Having lived for five years in Africa with Mary Anne, Chuck is deeply aware of the global inequality unfolding around the world, and his efforts, which he believes to be modest, are designed to reduce his complicity with what he views to be a flawed and unsustainable system.

It is this topic we continually return to during the 22-mile Skywalk, an annual memorial walk held the second Saturday of every May since 2010 along the length of the Crest Trail from Tijeras to Placitas. The walk is held in memory of the highest ranking whistleblower of the Iraq War, Colonel Ted Westhusing, my former commander.

Although Chuck is a Quaker, his sense of the “afterlife” diverges from the commonly held beliefs of others, including other Quakers. Chuck believes that our afterlife is defined by the extent to which we continue to live on, after death, in the minds and behaviors of those who survive us. In the case of Chuck’s wife, who shared his commitment to principles of social and global justice, Chuck believes that Mary Anne continues living her “afterlife” through his persistence in honoring the ideals that she cherished.

“I am addressing climate change and global inequity in a way that may appear extreme to many, but keep in mind I’m doing it for two.”

In past years, a handful of others have joined us on the walk, including Brant McGee, who served as a teenage medic in the highlands of Vietnam, as well as people who knew Westhusing personally, such as fellow cadets from West Point. Westhusing was a distinguished cadet and his career began with him serving as the Honor Captain for his senior class, a title reserved for that single cadet who best embodies the military virtues of honesty and integrity. As an Infantry Officer who went on to serve with the 82nd Airborne Division, Westhusing gained a reputation for exacting adherence to the warrior code of selfless sacrifice.

Westhusing was not only a warrior but a scholar, committed to continued learning and education. He would go on to write a dissertation on Socrates during a stint at Emory on his way to serving as a professor, in later years, at his alma mater of West Point.

It was from West Point that Westhusing would be called upon to serve in the Iraq War.

In 2005, following a number of months overseeing the training and supplying of Iraqi troops, Westhusing chose to sound the whistle on corruption, human rights abuses, and war crimes taking place at the hands of coalition forces and mercenaries in Iraq. Encountering indifference in the senior leadership he informed, which included General Fil and General Petraeus, Colonel Westhusing found his most deeply held convictions of integrity and honor challenged in a fundamental way.

Colonel Westhusing would never return home from this betrayal of his warrior code. Unable to remain complicit with a mission that violated his personal code of conduct, and encountering only indifference in his senior leadership, Westhusing made the ultimate sacrifice at a secretive training facility at Camp Victory, surrounded by private contractors and mercenaries he had long since ceased to trust.

As a soldier turned medic and ski patroller, I carry on despite the loss of my commander, knowing that my remembrance of Westhusing’s sacrifice is a way of repudiating my complicity in the unjust and illegal war that claimed his life, and the lives of thousands of others, including innumerable innocent civilians and non-combatants. Skywalk remains a repudiation of comfort, inaction, and complicity in the face of ongoing tragedy, injustice and abuse, whether associated with elective war, climate change, or global inequity.

We are always relieved to reach Tunnel Springs, at the northern end of the Sandias, before dark. The last mile is a scramble down a steep canyon, in which every step must be chosen with care. We rely on a persistent and steady pace to reach our destination, with the calm assurance that any challenge can be met with grace and overcome through a methodical and studied approach. This walk of determination, repudiation, and affirmation remains the highlight of my year.

I am grateful for all those who join me in making these modest steps in the name of decency, justice and peace, walking softly on the earth as we must.

Alex ‘Telemón’ Limkin is a member of the Angel Fire Patrol in New Mexico. He serves as the patrol’s health and wellness officer, and is a co-founder of the Sangre Academy of Telemark & Nature. He is a 2019-2020 NSP Subaru Ambassador.