Paid Ski Patroller to Volunteer and back!

Paid Ski Patroller to Volunteer and back!

lby Atkinson works in Utah on Powder Mountain’s professional ski patrol. He is also a volunteer at Snowbasin. When Colby is not taking beautiful photos around Utah you can find him freeskiing and mountain biking. Colby is part of the 2020-2021 Subaru Ambassador team. Learn more about Colby here.

There are some that understand what being a ski patroller is like, but most of my interactions with resort guests go something like this:

Guest: “So don’t you guys just like, ski around all day?”

Me: “Well how else are we supposed to get around the mountain?”

Me thinking: “I’m just doing my job and trying to keep everyone safe.” 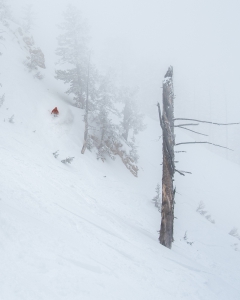 We are always there, but never there. To be honest, my interactions with guests this season were minimal. We could only ride the lifts with other patrollers, which meant we only talked to guests when at an accident. I knew this winter was going to be very different before it even started. I had decided to get a 9-5 job. My involvement with the ski patrol became minimal compared to past seasons, working Saturdays and Sundays. That’s it.

My decision to get a “real job”, as some of my co-workers call it, was based on the concern that COVID would affect the winter season. My fear was the resorts would have to close early. Switching to a volunteer patroller allowed me to still get a season pass and of course, continue to ski patrol without the worry of abruptly losing my income. However, after the season started, my worries switched. No longer concerned that COVID would shut us down, I began to miss the patrol family. I was scared of losing friends I had spent every day of the winter with over the past six seasons. With everything else that was going on in the world, my friendships and passion began to pull me back towards the mountains. Ski patrolling is not just a day job. It is a life choice of devotion to the safety of your patrol family and everyone else on the mountain.

I was able to switch to volunteering at my resort pretty seamlessly and also began volunteering at another resort across the valley. My apprehension about becoming a volunteer patroller had nothing to do with the validity of the volunteer squad. If anything, the most surprising thing about the transition was that I felt dwarfed by some of the volunteers. There is a bit of a 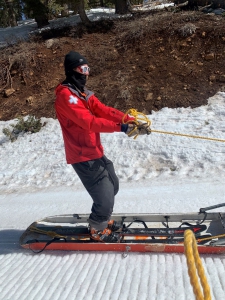 misunderstanding between pro and volunteer patrollers. Once I switched to volunteer after being a pro for six seasons, I immediately understood why. The volunteers are people who seem to have it all figured out. They are super over-qualified, some being ER doctors and flight nurses. I felt almost under-qualified among some of the other volunteers. Where the disconnect starts from the volunteer perspective is the lack of knowledge about the mountain and its operations. Things like signage and hazards change daily. Being there only once a week, and usually on the busiest days, is not enough to stay in the loop about mountain operations, and have the day-to-day understanding of the pro patrollers. This can create some animosity between the two groups. This was a thought deep in the back of my mind. My intention was to be the “bridge” between the two groups by understanding that disconnect.

However, life always has a different plan it seems. My time at my “real job” was very much not ski patrolling. I was on the production side of a company that prints ski maps. “Something to do with skiing!” I thought. I was inside all day and had a great view of the Wasatch front, which was my undoing. It was hard to put in 100% while it was snowing and my mind was in the mountains. Eventually, the distraction had me move in a different direction. So back I went, 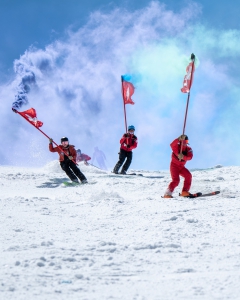 into the mountains! About midway through the season I went back to full time at the resort across the valley that I hadn’t worked for yet, moving again away from the people I normally spent every day with. Ultimately, I needed something new. Fortunately, the relationships developed in ski patrol are lasting. That’s just how it works. I spent the season making more friends and celebrating old friends.