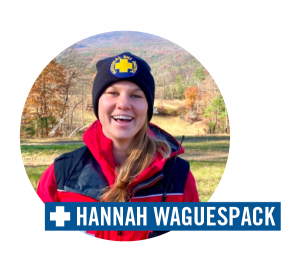 Hannah Waguespack is a year-round volunteer ski and bike patroller at Bryce Mountain in Virginia. She has a PhD in Neuroscience. In her free time, she enjoys water sports, mountain biking, and spending time with her growing family. You can learn more about Hannah as an NSP-Subaru ambassador here.

Being pregnant is hard work! And it can be even more challenging when navigating a fast-paced, labor intensiAve job—a job where people quite literally rely on you to transport them safely during some of their most vulnerable moments. How does one manage this while dealing with the reality of new limitations? While I’m excited to share the things I’ve learned as a pregnant patroller, I’m also excited to share the experiences of Patty Lessy, a senior patroller who patrolled through all three of her pregnancies in the early 80s and continued her patrol career as a single mom of 3. 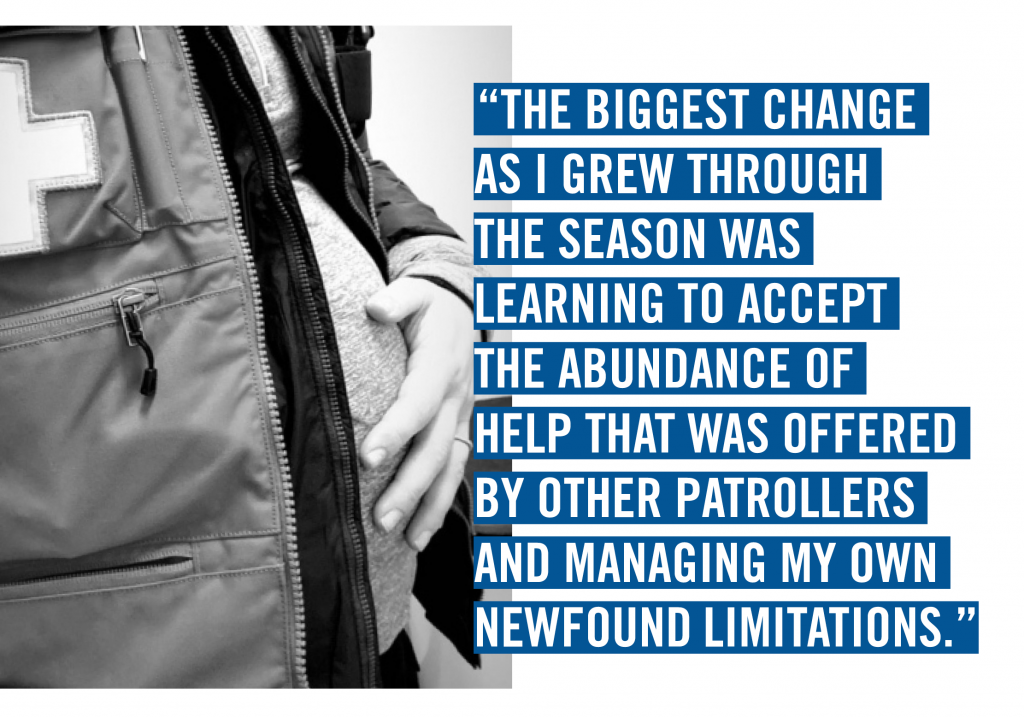 Before I got pregnant, I intended to continue skiing and mountain biking through my pregnancy. After all, they say anything you could do before you could still do…so, why not? The reality was much different from what I had planned or expected. What I did not anticipate was the newfound guard – both my own, and from those around me – that would arise with my expanding belly. Ski season 2020/2021 was largely uneventful. Not yet too restricted by a growing waistline, I enjoyed a usual patrol season with colleagues and friends. The biggest change as I grew through the season was learning to accept the abundance of help that was offered by other patrollers and managing my own newfound limitations.

My greatest concern during this transition was becoming dead weight to the rest of the patrol. When talking with Patty, she mentioned how she used her own new limitations to her advantage as a means of recruiting bystanders to help on the hill. Many of these bystanders became patrollers that are still members of the Bryce Ski Patrol today. For me, I began to use this as an opportunity to hone my skills in the aid room. My favorite thing about patrolling has always been being active on the hill. The transition to slowing things down to be in the aid room was a tough one for me. However, I also realized during this period that I was just one member of a much larger team, and I began to use this as an opportunity to grow in a different way as a patroller, knowing that this is a very transient period in what I hope will be a long and amazing patrol career.

What I enjoyed most about my conversation with Patty was her experience as a patroller with young children. In the end, her experience is what I think we all aspire to, which is to share the things we truly love with our children and hope they will love those things as we do. This was an experience she described as “pure magic.” She fondly recalled finis 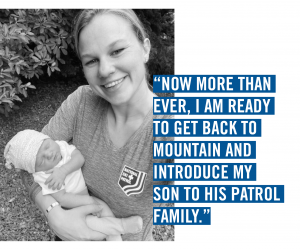 hing a full week’s work and packing up her three babies to work an additional two full days on the mountain because she loved it that much. This love clearly passed to her children, who are all three currently patrollers today. The patrol created a sort of self-contained freedom for her children, who were able to experience independence from a young age. In this way, she says the patrol helped her be the best parent she could be.

At the time I began this blog post, I was very pregnant and feeling the full extent of the physical limitations of pregnancy. In many moments, it was hard to imagine ever being the patroller I was pre-pregnancy. As I write now, 7 days postpartum, I am truly amazed by the resilience of the human body. Now more than ever, I am ready to get back to mountain and introduce my son to his patrol family.

If you are interested in becoming a 2021 – 2022 NSP-Subaru Ambassador apply here.