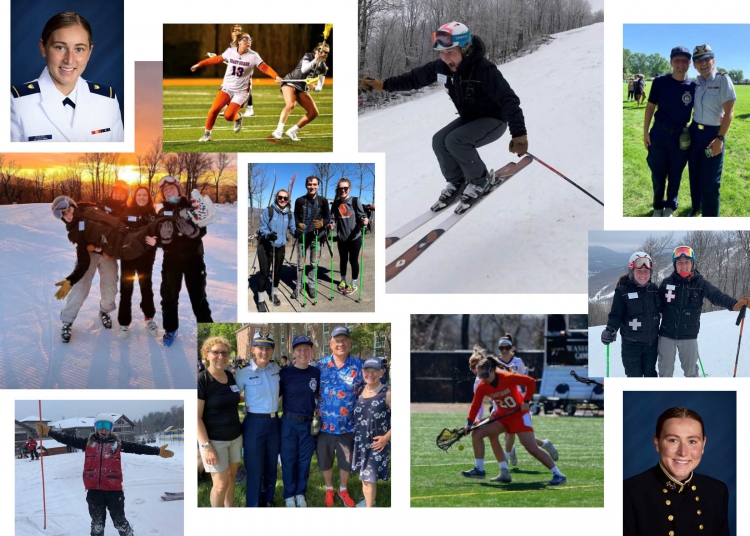 You’d be hard pressed to find two more impressive young women than Haley and Kira Howard, or to find a mountain that feels more like family than their home mountain, Windham Mountain in New York. Kira is a freshman at the Coast Guard Academy, Haley is a graduate now in flight school with the Coast Guard. They are both talented and accomplished lacrosse players. And, they are both still active members of the ski patrol at Windham, where they are happy to return when they are home on vacations and even weekends.

Kira and Haley are third generation skiers whose family has been heavily involved at Windham through their lives. They call their grandmother – who is 84 and still working as a ski instructor – Skima, and their parents are also long-time ski instructors and coaches. Their mother now volunteers with the adaptive skier program there, and their father coaches the girls’ ski team for the local high school, and with Windham’s U-14 program on weekends. “Windham is very family-based,” Kira remarked. “There are lots of us whose parents work and volunteer at the area. It would be great if we can keep the tradition going.”

I was lucky to meet Kira and Haley through Henri Rivers, president of the National Brotherhood of Skiers, who, along with his wife Karen, coached ski racing at Windham with the Howards as the girls were growing up. He suggested we connect with them because patrolling had been central to their lives on and off the hill.  Kira and Haley remember Henri and Karen as close members of their ski family at Windham.

Both girls ski raced growing up. When she was a sophomore in high school, Haley, the oldest of the two, joined the patrol and took Outdoor Emergency Care, motivated by an interest in gaining some medical knowledge and experience, and by a good friend who patrolled. Kira also had good friends on the patrol, and followed her sister there when she was a sophomore. She did not intend to again follow her older sister into the Coast Guard Academy, but was ultimately drawn by the Academy’s humanitarian and service mission.

Asked about their experience being women on ski patrol and in a military academy, Haley and Kira said they never felt that they were treated differently in their patrol. Kira pointed out that Windham’s patrol director is a woman, Maggie Brabazon. “She is a great leader,” Haley said. “Having women in leadership is so important.”

Kira added, “Seeing women in leadership positions brings in more women, and makes it evident that women are capable of doing anything.” They are both excited that President Biden has nominated a woman – Adm. Linda Fagen – to be the next commandant of the Coast Guard. She would be the first woman ever to lead a branch of the U.S. Military.

They continue to patrol when they are home on winter vacations and the occasional weekend. “We have so many friends [on the patrol], it’s fun to be there over break,” Kira said. Haley said that right from her OEC course, being on patrol has been about learning, fun, skiing and friendship. “It is a happy place, it doesn’t feel like work,” she said.

Patrolling provided them many skills that prepared them for their work at the Coast Guard Academy. Haley said beyond her OEC and EMT credentials, her work on patrol taught her how to work on a team, and how to make quick decisions. Both agreed that the importance of working with others on patrol helped them mature in high school, and be ready for the challenges of the Academy.

Asked what the best part of patrolling has been, both cited the friendships and camaraderie. “And first tracks on a powder day,” Kira added.