Some victims recall first hearing a ‘loud crack’. Others suggest that they felt the snow move just before hearing the crack.

For me, there is an inescapable dread in knowing regardless of whether you heard it or felt it first, you are about to experience the horror of being in the wrong place at the right time – and you are in the middle of an avalanche. 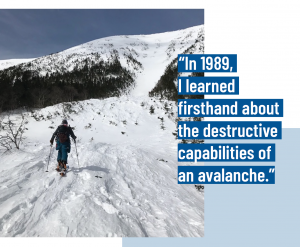 As Warren Miller once stated; “an avalanche has one job, and that is to kill you”. That year, the first of three friends of mine died in a side country avalanche in Summit County, Colorado. I’ve since lost two additional friends and acquaintances, the most recent being early in 2021 on the West Side of Mt Washington, New Hampshire. Within the Ammonoosuc Ravine drainage, an avalanche took the life of a highly experienced and fully equipped skier.

He was one of 37 husbands, sons, daughters, mothers, and fathers that lost their lives to an Avalanche in North America last year alone. This was the deadliest year for avalanche fatalities in 70+ years. Those of us who work on or recreate in the mountains during winter will likely at one point or another depend on good decision-making skills and equipment to help us navigate safely through avalanche terrain.

Back in 1989, Avalanche Beacons were primarily used by Patrol, Government Agencies, or the Military. In fact, Skadi and Barryvox were producing only their second-generation transceivers at that time, following the original 1968 design by Dr John Lawton at Cornell University. Search & Rescue was primarily based upon the use of highly trained units equipped with Avalanche Dogs to locate the general vicinity of a victim followed by a “probe line” of pros/volunteers to identify the specific location of burial. Commonly, these probes were nothing more than the bamboo poles we Patrollers use today to mark in-bound hazards. 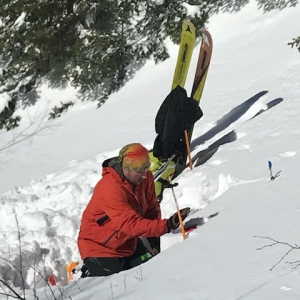 Today, through organizations like AIARE and AAI, outdoor enthusiasts have access to avalanche education and training opportunities nearly year-round. Though the technology driving beacons remains fundamentally the same (based on the transmission of radio waves at specific frequencies), the “user-friendliness” in its use has advanced significantly. Probes are now aluminum or carbon fiber, and shovels are specifically designed for cutting through the hard, almost concrete-like, snow of an avalanche debris field. Winter recreationalists also have access to “Beacon Training Parks” where one can learn, fine-tune and most importantly practice the use of a Beacon. These Parks are available free of charge in most parts of the country where winter backcountry travel is commonplace.

Since that first painful loss was felt in 1989, I’ve mindfully continued to work and recreate in the mountains. I’ve had both formal training and 35+ years of experience traveling in Avalanche terrain.

I’ve continually updated equipment as technology, resources and research data has suggested. Yet, even with this enhanced knowledge base, I’ve personally experienced two additional avalanches – luckily both were only scares, without injury and loss. Accidents do happen, and will happen. When they do, I believe it is our responsibility as patrollers to ourselves, our families, and our partners to have the equipment and the knowledge to use it.