How our patrolling candidacy strengthened our marriage 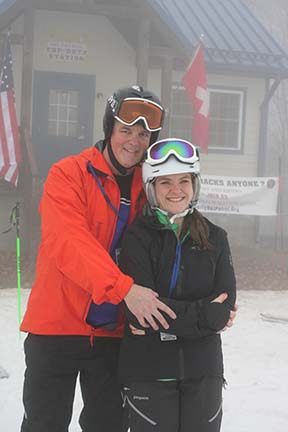 When my then-girlfriend Rosemary and I finished a tour with the ski school, we decided that the next step in our evolution was to try out for the patrol. For us, there were several obvious benefits, such as learning to ski better, new friends, and medical training that turned out to be lifesaving later. I purposely exclude skiing for free in that list because after hotels, skis, radios, and injuries we spent more than two season passes, by a lot.

As candidates, we studied the Outdoor Emergency Care textbook’s 36 chapters together. We had great instructors and took the course material very seriously. My wife got a 99% on the final exam, while I scored a 94%. To strengthen our skills, we decided to organize eight weeks of open OEC practice sessions at our home that included dinner cooked by me. This helped us and the candidate class.

On exam day, my wife flew right through while I had to redo one station. Still, we remained very much a pair in this somewhat stressful experience. We passed all the Federal Emergency Management Agency and CPR tests, then we went into Outdoor Emergency Transportation training on the snow in early January.

We did our first candidate year as the lesser skiers in a pack of eight, despite my past as a beginner ski instructor. My wife had less time on the snow than I did but was honestly every bit as good or better. Rosemary was younger and untainted by bad habits, which was an advantage. However, the ski year was so warm we never even got to the practice test. The season ended weeks early. So, we were told to just return for year two.

After our first year as candidates, we got married and invited the patrol to the wedding. Then we spent six days at Lake Placid, skiing five of those. No matter where you patrol, it is inspiring to be on a mountain that has hosted two Olympics. The history and the town were amazing.

On the hill, we befriended their patrol. The insider info they gave for their five Olympic slopes made for a far better ski experience. We talk to the patrol at every mountain now because no one knows what is safe, open, or closed better than they.

On our second candidate year, they split us up on day one, which was troubling. There was some talk that they might take just one of us rather than both. This was stressful because we did not want to train or patrol half-and-half. We had perfect attendance, were on time, and even spent two days a week in the nearby hotel so we could get more snow time. I was skiing three to four days every week, and we had bought better gear on pro deals. We had no life other than work and our hill.

As we approached our first OET exam, Rosemary had a bad twisting fall and lost a couple weeks of training. Then she had another fall on a mash-potato double black run that got her a sled ride to the bottom. I tore a labrum on a hip that already was bone on bone, which I did not know till an MRI later. I tested positive two weeks later for a crippling injury that I was not yet fully aware of.

Our postseason medical bill was over five figures after the flexible spending account and secondary insurance. In the end, we just ran out of health and money and converted to alumni status instead of going on with patrolling.

We maintain our OEC and pro status as NSP alumni. We get an Ikon Pass and still ski with the patrol 10 times a year. On many occasions,

we are their guests. We volunteer and help with fundraising events. We also still run the 10-week, two-and-a-half-hour OEC Program after Labor Day for candidates. For patrollers who attend, that means dinner on us, then two hours of OEC practice at our home with instructors we invite. We pay for everything, and Rosemary’s company donates $50 to the patrol every time they come. That usually comes to about $1,000 yearly.

Our ongoing benefits are skiing with our friends, medical training, and volunteerism. We love the patrol’s mission, and we still do all the FEMA training, CPR, and OEC refreshers plus the 10-week practice at our place. Consequently, we have kept all our skills. Having a pulse oximeter helped me realize I needed a BiPAP after low O2 numbers showed up when skiing at high altitude. Basically, we have saved ourselves and several others through what the patrol has taught us.

Our marriage is stronger because of what the patrol gave us. We have the best friends we’ve ever known. We entered the patrol as nationally competitive triathletes and having HAM radio licenses, but the knots, medical training, and ability to throw line over a branch at home all come from the patrol.

We have noted some patrol families manage an entire skiing culture, with either kids ski racing and a parent patrolling, or both parents and their children patrolling. If you marry another patroller, you partner with a very giving person who knows how to help you if you choke on something or need CPR.

As for my wife and I, we will keep our OEC up until we rejoin a patrol or there is only one of us left. We love our new friends, skiing, and our travels to Colorado and Vermont.

If I could give one piece of advice through all of this, marriage is made stronger by the extraordinary things you share with your spouse. Faith, children, ski patrol, triathlon, and charitable work all make a foundation that is unique to you as a pair. I have seen my wife in times that required courage and strength, when she was freezing cold, and when under pressure during a bad injury we worked. We are now inseparable, just as it should be. Thank you, NSP, for that foundation!