Wading through the deep waters of life, surrounded by love and beauty that is balanced by willful ignorance and fear, I am learning the lessons of moments long past.  Toxic behavior, violence and injustice have been normalized and it is a reminder that we all must do better.  We must do a better job in the community, in our personal lives and in the workplace.  We must learn from our mistakes as well as the mistakes of others.  Sometimes the mistakes are obvious, sometimes they are not, like when we are misled by outdated culture.  Macho behavior permeates the world of ski patrol.  The false beliefs that drive issues of gender inequality are thankfully being called out.  The behavior of hazing new patrollers that is shrugged off and simply categorized as “paying your dues” is dissolving.  Changes in many aspects of our industry are leading to a shift in culture.  Respect, inclusion and safety are driving forces.  However, there is still much work to be done, and it starts at the individual level. 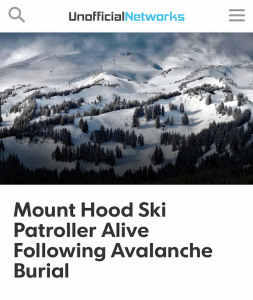 A few years ago, I was caught, carried and buried in an avalanche while on the clock.  In retrospect, the red flags that I could find myself in a situation like this were present, but I had chosen to discount their value due to my own desire to complete the tasks I had accepted.  Ski patrolling is a physically and mentally demanding job.  Certain tasks carry more risk than others and when we accept a task, we intend to complete it.  Whether self assigned or asked by the dispatcher, we take pride in making sure the job gets done, because if we can’t complete it, one of our teammates will need to.  A macho attitude and ego can cloud judgement about taking on and completing a task, even in dangerous conditions.  Pair this culture of duty with heuristic traps like terrain familiarity and the expert halo and our acceptance of risk is heightened.

On that January morning, I set off with two highly experienced avalanche professionals to work in an area that had yet to open that season.  The terrain is steep and rowdy. Cliffs, spines and occasional tree islands make up one of the most revered zones within the ski area boundary.  The 55+ degree rock slab up top has difficulty holding snow so we were experimenting with different strategies to build the snowpack.  A series of snow fences were placed in specific locations to help load and catch the snow to bury the slab.  That day we had intentions of removing the cornice, boot packing the fresh snow, and shoveling snow onto the slab, as well as creating a snow bridge over the creek that guarded the exit at the bottom of the face.  We set up ropes, rappelled down and got to work.  Everything was looking good and our small team was very productive moving snow. The wall was looking quite good and the skiing was going to be steep and deep.  The 30 degree Fahrenheit temps had climbed to a critical 32 degrees while we were shoveling.  Because we were sweaty from the physical work, we hadn’t noticed the warming, which affected the snow’s stability.  Before dropping in, the three of us discussed our options. We knew it was a bit spicy but it still felt manageable.  We could ski the face one at a time, from one safe spot to another focusing on slough management or we could bail and go back the way we had traversed in.  Turning around and not creating a bridge over the creek meant that the area would not be ready to be opened in the coming days; it also meant that we had failed to complete our work mission.  In addition, the skiing looked really good. Moved by what we knew, completing the task was paramount.  We collectively decided to ski the wall conservatively. 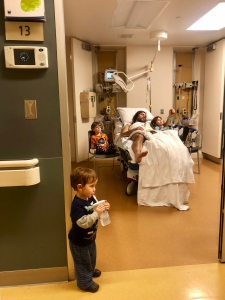 Skier one dropped and made deep turns to the top of the spine.  I dropped in next and three turns in, the slope released.  Immediately I deployed my airbag and felt the crushing weight of the snow and the rapid acceleration.  The feeling of hitting the rocks at the top of the first cliff band and then going airborne are my last memories before being revived by my highly skilled teammates.  After an assessment, repacking of my airbag and putting my harness back on to lower me to a spot where others patrollers were able to get a sled, an arduous and emotional extrication ensued.  The airbag no doubt saved my life, as did the skill of my teammates.  After a night in the hospital and months of recovery I returned to patrolling.

This incident was a great learning experience, for myself and the patrol.  We all learned from these mistakes, and a shift in culture occurred.  Backing off of a task is now acceptable and we mustn’t let our egos get the better of us.  Collectively we got better, and we are still improving.