What is Giving Tuesday?

Giving Tuesday is “a global day of giving fueled by the power of social media and collaboration” which takes place this year on Tuesday, December 1. National Ski Patrol encourages you to harness your social network and fundraise on Facebook. NSP is offering prizes to successful fundraisers and randomly selected members who participate.

Why fundraise with NSP?

Giving Tuesday receives national promotion and attention. It is a great opportunity to raise money for local patrols along with the national organization. NSP will promote the campaign via our social media channels to support the campaign and boost donations to local patrols.

In 2019, Facebook and PayPal partnered to match the first $7 million of eligible donations made on Giving Tuesday. If they do a similar match this year, we will be eligible. Anyone who wants to promote giving to NSP and a local patrol can participate. See the information below to learn more about the ways to join in. 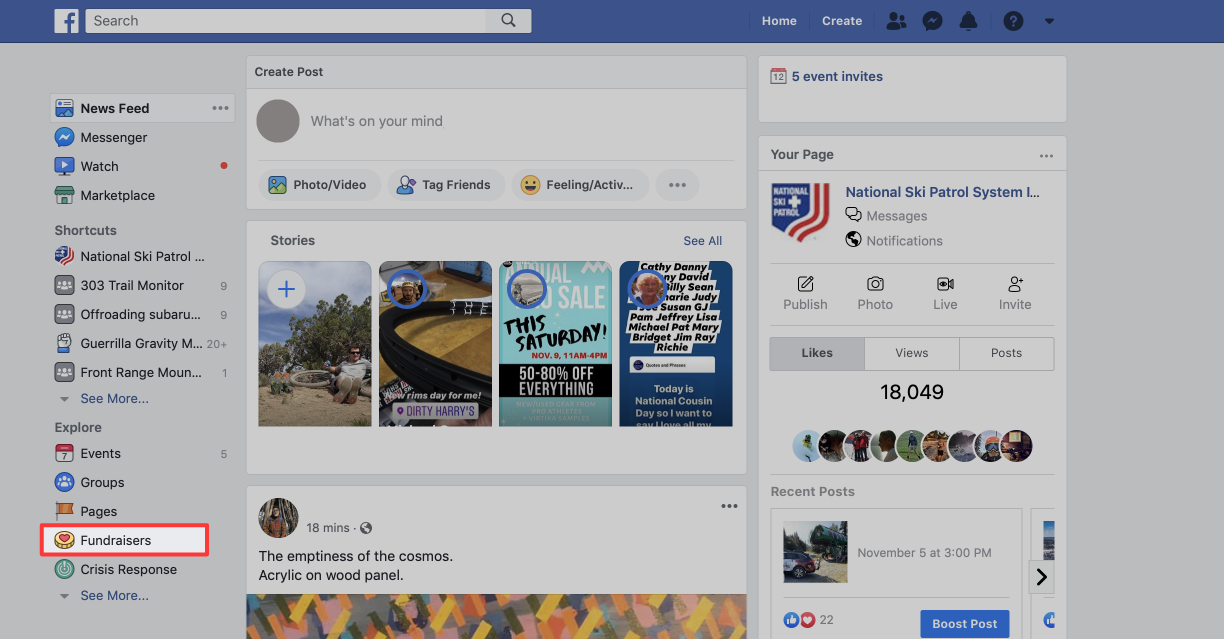 When can I fundraise?

NSP’s competition for prizes is underway, and run until 11:59pm on Giving Tuesday, December 1. However, there are already fundraisers running now, feel free to start your fundraiser at any point! Here is an example.

Individuals who create a Facebook Fundraiser that receives donations will be eligible to win prizes – 3 for the highest fundraising totals, and 2 randomly selected from all of the fundraisers.

NSP will also promote the campaign via our Facebook and Instagram pages, which have about 18,500 and 9,000 followers respectively.

Why give to NSP or a local patrol?

The National Ski Patrol is a 501(c)(3) nonprofit membership association. Many of NSP’s 31,000 members are volunteer patrollers, who get and keep up the training they need to keep the mountain safe on their own time, and at their own expense.

Your donation contributes to NSP’s gold standard training for the patrollers who ensure that trails are safe before you put your skis on them, and who would be the first on scene to help in the event of a bad fall or accident. It helps NSP keep the cost of that training low, as many patrollers pay for it out of their own pocket.

Your donation ultimately helps NSP and its members fulfill our mission to “keep people safe on the mountain and during other outdoor activities.”

You can be sure that your donation will be used wisely and with purpose. NSP earned GuideStar’s 2019 Gold Seal of Transparency.

Why support NSP when I already pay membership dues?

Donating to NSP helps us to provide resources and produce up-to-date training materials, like the soon-to-be-released sixth edition of Outdoor Emergency Care, and to implement new programs, like the new Outdoor Risk Management program. Your donation helps us keep the costs of our training affordable (for comparison, an American Red Cross 3-day Lifeguarding class offered in the Denver Metro area currently costs $275; Lifeguarding Instructor classes cost $395 – $425).

Your donation also supports work like streamlining the management of member records, and providing materials and resources to local patrols to support their recruiting and retention efforts.